Posted at 23:47h in GROW Journal, Uncategorized by WellbeingGrow 0 Comments
Share on: 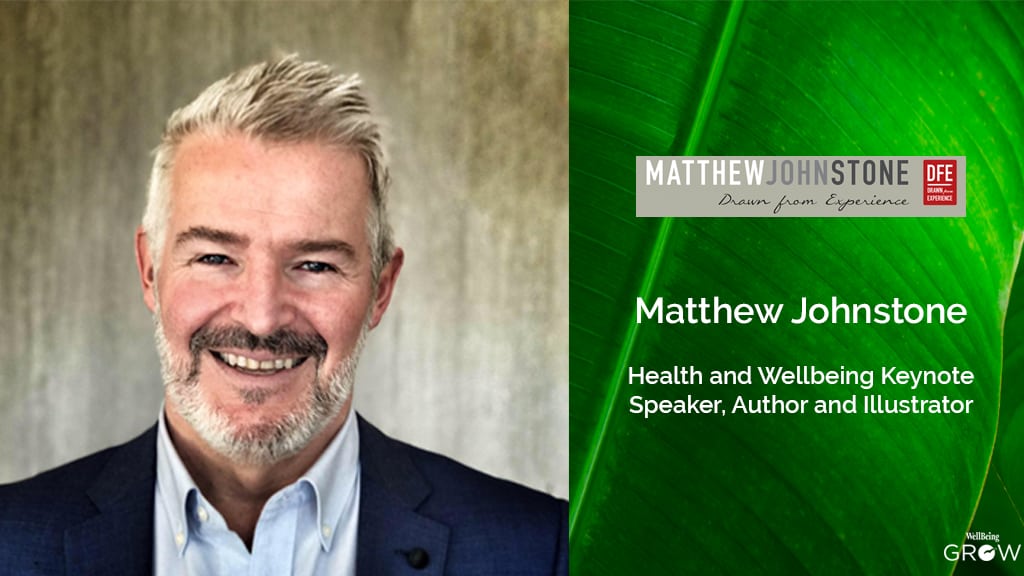 “When I came out with I had a Black Dog, there were a lot of people who got in contact with me after and said ‘I’m so surprised because I had no idea’. And I think because we’re all constant performers, there is great shame in talking about these things and a lot of difficulty… And the thing is there is nothing special about my experience. I am not the sum total of my depression and I think because it is a very, very common experience for many people — you know, 1 in 5 Australians will experience a mental illness each year — I suppose it’s not uncommon but it is also not common for people to actually get up and talk about it or create books on it.”

Matthew Johnstone is an author, artist, speaker and strategist who speaks openly about his experience, skills and knowledge regarding mental health and overall wellbeing. He’s delivered inspiring keynotes and speeches to the teams of some of Australia’s largest corporations, workers on rural farms, school children, politicians and everybody in between. The power of his talks comes from his own experience with depression, which he now uses as a way to connect with and empower others. Johnstone also incorporates his art and illustrations into his talks and books on mental health, with his 2005 bestseller, I had a Black Dog, published in more than 20 countries.

Prior to this, Johnstone spent over 15 years working in creative advertising agencies in some of the world’s most renowned firms. He has worked in Sydney, New York and San Francisco, and was a self-confessed perfectionist and workaholic during these times. In this week’s Wellbeing Grow podcast, Johnstone and host Terry Robson discuss overcoming stress through vulnerability, finding authenticity and embracing mindfulness to create a better work-life balance for yourself.

TR: … You’ve written a book, I had a Black Dog; explain to me what you mean when you say “I have been doing life but not living it”.

MJ: Well, advertising, I guess, is all about being on and up; it is winning business, it is impressing clients. There is a saying “you are only as good as your last ad”, or “you are only as good as the last bit of business you bought in”…. [The industry] is full of clever people and it is all about being relevant and all that sort of stuff. It is not the place for melancholy or difficulty because you have always got to be on. It is a very fast-pace business, it is like any media I suppose… And I thought I could outwit it or I could outrun it or I could outsmart it somehow.

TR: You said “depression had been in and out of my life since my late 20s and I invested huge amounts of energy covering it up”… Was that covering it up to yourself or to others?

MJ: To others. When I came out with I had a Black Dog, there were a lot of people who got in contact with me after and said ‘I’m so surprised because I had no idea’. And I think because we are all constant performers, there is great shame in talking about these things and a lot of difficulty. It is a very sensitive kind of area and in fact this often comes up in interviews. And the thing is there is nothing special about my experience. I am not the sum total of my depression and I think because it is a very, very common experience for many people — you know, one in five Australian’s will experience a mental illness each year — I suppose it’s not uncommon but it is also not common for people to actually get up and talk about it or create books on it.

TR: You were warned about releasing the book weren’t you?

MJ: Yeah, I had a couple of people say don’t do it. They said you will ruin your career, you will lose all your responsibilities. And I suppose in a way that was them projecting all their fear onto me. And I have to say quite honestly, it was one of the best things I have ever done in my life. Because what I have since learned, and one of my favorite sayings is, you are only as sick as your secrets. So the more you suppress, hold down and try to bury, the more it is going to creep out in other ways.

When the book came out, I remember handing the book to my publisher and I said, “I just want to make sure I am not going to become the poster boy for depression,” and she said, “Well, Matt, you know you’re putting this out there and what happens to this I have no idea and I can’t control.” Which wasn’t particularly comforting! But it was still seriously the best thing I ever did because it actually set me free. There was no pretense for me to hide behind and I could drop what I call my show face, which was something I had nurtured and perfected for most of my adult life. And I realised that if I had put half the energy into getting well and understanding what it was I was going through rather than putting on this pretense, I would have gotten better in half the time. And there was a lot of collateral damage in the way of relationships, leaving jobs… I was always jeopardising a lot of what I was doing. So it was important that it happened.

TR: There is a lot of power in commonality. And we are actually often all going through the same thing. Let’s talk about some of the things that apply specifically to the workplace… I know you like to talk about being mentally healthy as a distinction to mental health, talk us through that distinction.

MJ: Well, I was at a conference years ago in Byron Bay and there was a professor called Professor Rob Donovan, who was the head psychologist at The University of Western Australia, and he talked about being mentally healthy. And he said the two words “mental health” [are] couched to try [to] soften words like depression or psychosis or schizophrenia or anxiety…. But he thought it would be interesting to go and research what mental health meant… And what came back [were] all those things, you know, mental instability, depression, anxiety, fear and he said, “What if we tweak those words a little bit and we made the words ‘mentally healthy’?” And he put that under research and what came back was mindfulness, exercise, sleeping well, community, good communication, and I just went “it’s brilliant, it’s brilliant”. And, you know, that is what we should be aiming for, prevention is the greatest cure — if we can talk about mental health… The Black Institute has taken that on… it is such a great, simple thing to do, because it is positive.