Posted at 01:22h in GROW Journal, Stress by WellbeingGrow 0 Comments
Share on: 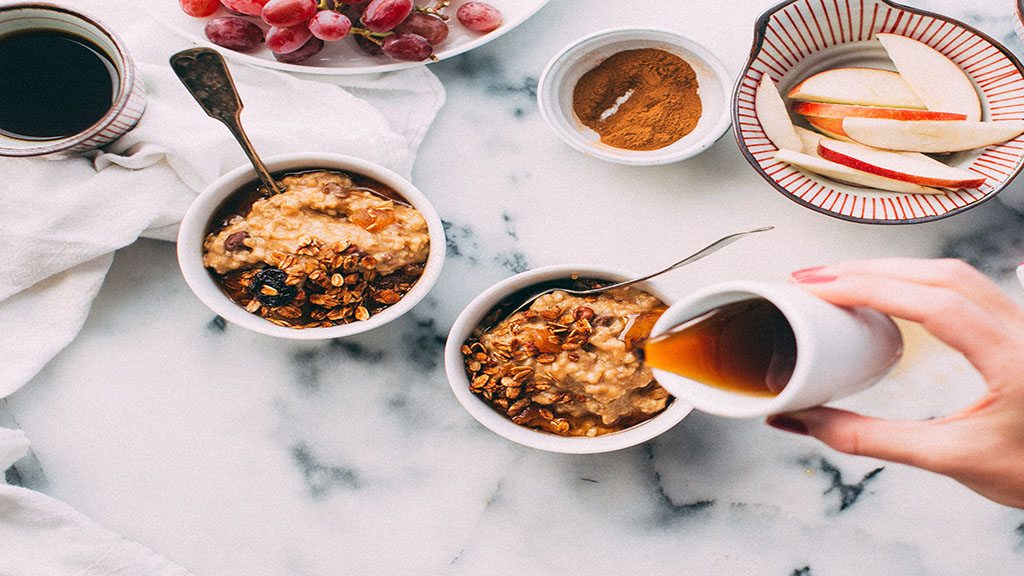 If you reach for the cookie jar, or nibble on a chocolate bar when you feel stressed at work, it’s time to rethink what you eat and stock up on healthier comfort foods, that taste good too!

It all starts before you get to work. You can still have a feel-good carb fix with a daily dose of porridge. Oats is a superfood that boosts serotonin levels in the brain. Don’t add sugar though – toss in some sliced banana or apple, for a dash of sweetness.

Dark chocolate contains phenylethylamine, it effects your brain in a similar way to endorphins. A University of Zurich study of two groups showed those who ate dark chocolate had significantly reduced cortisol in a stressful situation than the other group. A little bit of what you love is good for you, but of course a whole block isn’t, so limit yourself to two or three pieces.

This bird is a great source of tryptophan, an amino acid that’s used in the biosynthesis of protein. Your body also converts tryptophan into serotonin – which boosts your mood. It’s best to eat it at breakfast or dinner though. Turkey also contains melatonin which can make you sleepy, a lunchtime turkey salad or sandwich might make you nod off at work.

Green tea can ramp up the feel-good factor to beat stress. A 2017 Japanese study of over 40,000 people showed five cups a day can reduce stress levels by 20%. To brew the perfect cuppa, start with fresh water, let the boiling water cool for a few minutes before you pour, and allow the tea to steep for a minute or two.

Bring on the blueberries

These petite treats are a nutritional dynamo – they’re chock full of anti-oxidants, vitamin C, and they combat oxidative stress which can have negative effect on brain function. New research by the Louisiana State University showed snacking on blueberries can reduce the risk of depression and suicide in those with PTSD. Stash dried blueberries in your drawer for a healthy snack, or add them to yogurt.

Nuts are an excellent source of zinc which combats stress. Cashews take pole position with the highest amount, pine nuts, pecans, almonds are good sources too. Nuts are filling, so a good go-too snack if you work through lunch. No matter what your nutty preference, because they’re high in healthy fats, the Dietitians Association of Australia recommend only 1/3 cup a day.

Be a happy little vegemite

Next time you pop vegemite sandwiches in the kid’s lunchbox, you might think about making one for yourself too. Researchers at Victoria University, who surveyed over 500 participants, showed those who ate vitamin B spreads like Vegemite, Marmite and MightyMite had lower stress levels than those who didn’t. Try it with avocado on crispbread, make cheesy vegemite scrolls, or try it on toast with eggs.