Making a dent with Matt Kean, The NSW Minister for Innovation and Better Regulation

Making a dent with Matt Kean, The NSW Minister for Innovation and Better Regulation

Posted at 06:59h in GROW Journal, Mind by WellbeingGrow 0 Comments
Share on: 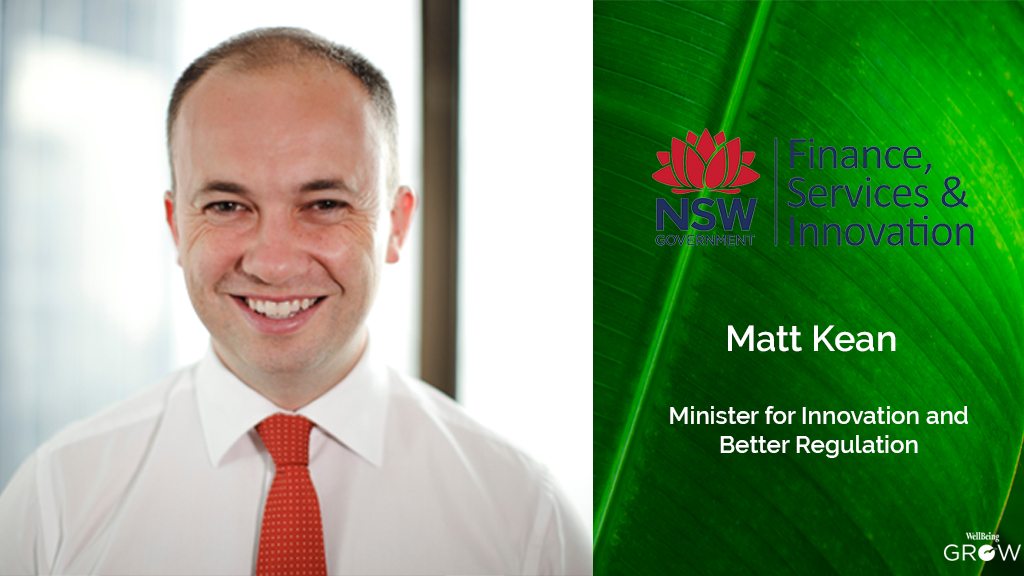 The NSW Minister for Innovation and Better Regulation, Matt Kean, is building a stronger, more effective mental health care system to help people break down the barriers of mental illness and reach their full potential. Mr. Kean is in charge of three crucial areas of government in NSW, one area being work, health and safety. His concern regarding mental illness and its alarming effect on people in the workforce can be depicted in the growing rates of presenteeism and absenteeism caused by these conditions.

On top of this, there has been a shocking spike in the number of fatalities lost to mental illness. This year, more people will die from a suicide than a car accident. In our podcast between Matt Kean and Terry Robson, the two discuss the impact of work-induced stress and the far-reaching consequences it can have on the mental health of Australian workers.

TR: you went there straight to UTS to study business. Do you remember, when you were studying business, where you were intending to head?

MK: … I didn’t know at the time, upon going to Uni that I would meet a number of people, which led me down the political path. And that really inspired me, enabled me, to find a passion for community service. Which is how I ended up in politics…

TR: we know that you have a very deep and genuine interest in the issue of mental health. We are going to talk about and explore that in the workplace context. What are the origins of that for you, personally?

MK: Look there are two things that make mental health such an important policy area for me and such an important thing for me. The first thing is, growing up my mum suffered from a severe mental illness. I watched her battle through every day, trying to do basic things like leave the house to go to the shops. We couldn’t go on holidays because mum couldn’t fly. But, with the right supports, with the right medications and the right environment, mum leads a happy and fulfilling lives. So I know firsthand the impact that mental illness has on individuals, but not just individuals, on families and communities. The platform I now have, the opportunity I have as an individual in parliament, as a minister of the NSW government, to help make life easier for people like my mum is one I’m not going to pass up.

The second thing that inspired me on this crusade, to help people suffering from mental illness is, it is an issue I talked about in my Maiden speech that was about a young fella, Mike Powel, who worked on my campaign in 2011. I got to know Mike, he was smart, he was articulate, he had all the potential in the world and Mike tragically took his life far too soon. And Mike’s story is not a unique one. The reality is this year; more people will die from a suicide, than die on our roads. And it is a national disgrace. Every day of the week, people are attempting suicide, or are succeeding at suicide. It is the biggest killer for males under 35 and the biggest killer for females under 45, and as I was saying before I think it’s a national disgrace. So I do not want to miss the opportunity to try and make a dent in that. We know that mental illness is one of the leading causes of suicide, so if we can address the issue of mental health, I think we could have a dramatic and lasting impact on the rate of suicide in this country.

TR: … You’re finding, receptivity towards government for action in this area?

MK: Yea and I think that government is a slow moving beast. And I think what we need to do is show leadership, and drive the change, and that’s certainly, now that I have this unique position as a minister sitting around the cabinet table; having the ability to make decisions about what we fund and what we don’t fund, it’s this opportunity that I want to take to make a dent in the issue of mental health in NSW.

TR: We can legislate or regulate for certain things but how do you actually change culture, in this space, what do you think we actually need to do to change the culture?

MK: Well the first thing we need is leadership. We need Government standing up and practising what we preach. Not only matching our words, but with deeds. And that’s exactly what this is all about. We have had our Summit, we have bought together all the stakeholders, we have had our talkfest if you like. Now it is about the rubber hitting the road, implementing these strategies across workplaces. Currently, we are going through the process of ensuring those strategies are backed by money, so that’s our budget process and our cabinet processes and what not. But it requires leadership from government and that is the kind of leadership that I am trying to provide here. We are working with captains of industry, we are working with business, and we are also working with union groups and employees across NSW. We want to see great outcomes and ultimately NSW to have the best mental health in workplaces in the country.

TR: … do you think? That it’s not a taboo subject anymore?

MK: I think that there is a lot of awareness. Mental illness is just as real as a physical illness, but there is still a stigma in place. I want us to get to a stage where there is absolutely no shame in talking about depression or anxiety or stress related illnesses. Or even more acute illnesses like schizophrenia… We need to get to a stage where people can feel just as confident talking about mental illness, without judgement, without stigma, as they would about physical illness.

TR: In 10 years, where would you like things to be?

MK: I want NSW to lead the nation and be up there with world leaders when it comes to mentally healthy work places. I think there is so much good that’s been done but there is a long way to go. Part of our strategies is helping businesses, supporting employers to help to turn that vision into reality.

Terry Robson, is the editor-in-chief of WellBeing magazine. He has written five books, presents on-air segments for radio stations around Australia including a weekly program titled Terry on 702 ABC Sydney’s Afternoons program with James Valentine, and is also co-presenter of the ABC podcastseries Talking Health. Terry has previously worked as health correspondent for Sky News, the Seven Network, Channel TEN and NBN Television. He currently makes regular appearances on The Morning Show.